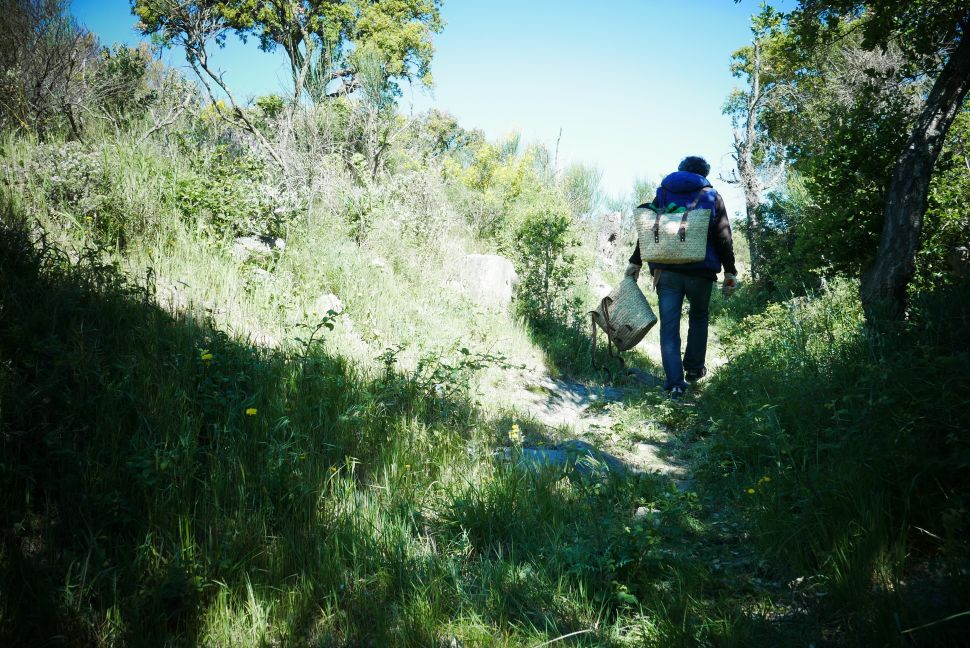 Musical piece inspired by the sounds and tempos of the harvesting day in La Gutina. Composed and performed by Barbara Van Hoestenberghe specially for BRAVANARIZ.

If you want to listen to it while reading this notebook entry, press play.

This year spring has come a month early. At the beginning of March the first Spanish lavender bushes began to flower in La Gutina, taking us all by surprise. Every time I see an alteration of this kind I can’t help but get a bit sad, then sadness turns to anger. Pretty soon they will be making fine wines in Denmark (are we supposed to be pleased about that?). Climate change, for those of us who work on the land, has been a serious problem for years now. It is exasperating to watch the discredited ways of our public institutions and see the lack of concern on the part of the general population, better-informed than ever but totally unable to respond to the situation.

Yet that is another subject altogether. Let’s return to the spring of 2017, which apart from coming too early was absolutely beautiful. Then more surprises came our way. The spontaneous ponds in the region were filled to the brim for the first time in forty years. Bárbara and Joan Carles called me with an enthusiastic message: “They’re full! There’s lots of water, Ernesto, come take a look for yourself!” Something spectacular, though in a discreet way, since it made no fuss. That may sound odd, but if some day you could be there when this marvel of nature occurs, for sure you’d grasp what I am getting at. From the very start I knew that here in La Gutina is where we would capture our first CAMÍ. If you want to know the reasons why I am so sure about this, just open the video clip available under this post. But to cut to the point I will simply say this: the place thrills me. Always. 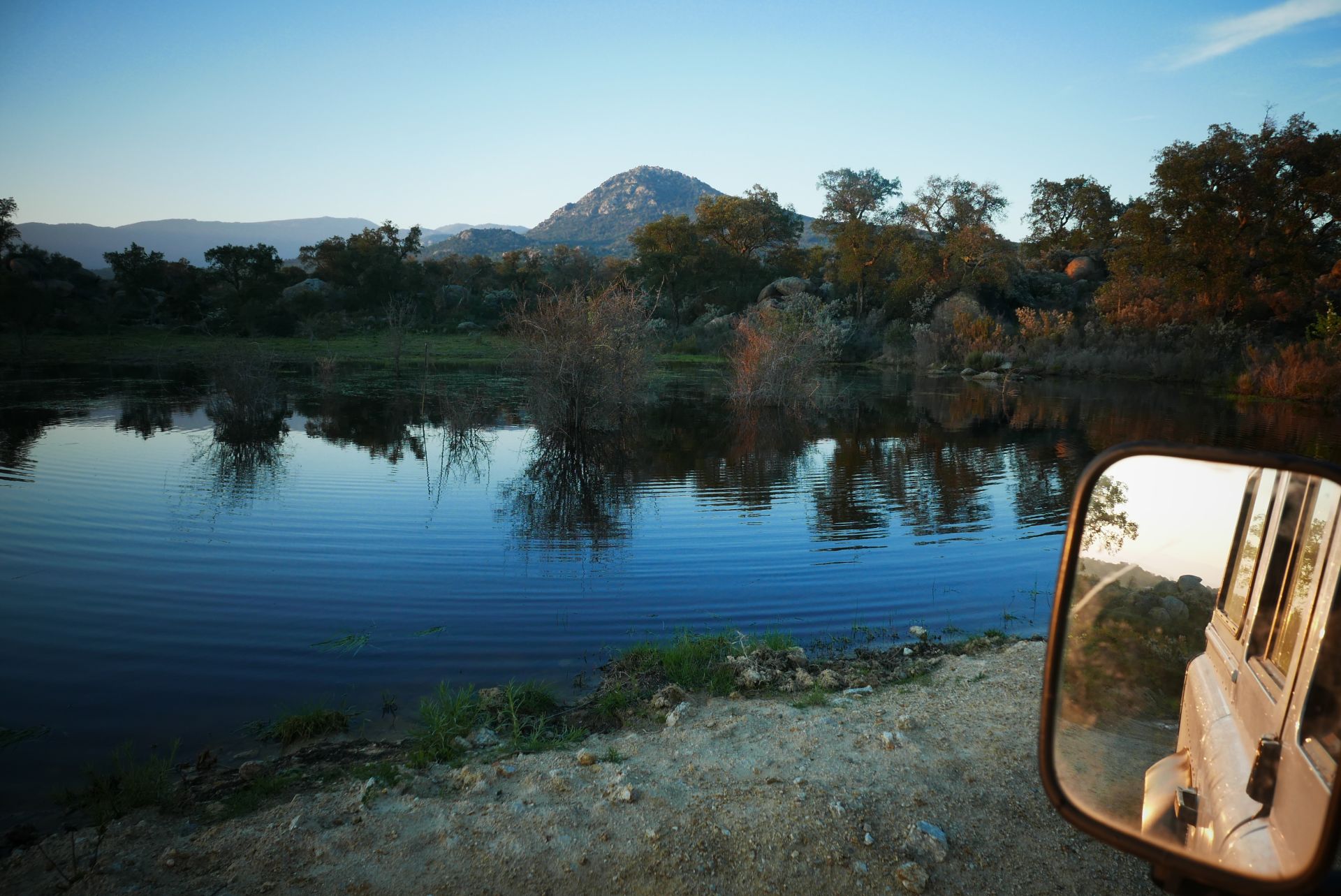 Just wait until the right moment, when the variety of colours has reached its peak. There is order in the midst of chaos, not everything sprouts at the same time. Spring has its own internal logic in the Empordà region. It all starts with the almond trees in February, leading the change with their white blossoms tinged pink. There is nothing harsh about that white, it recalls the strength in fragility, its incredible power. Then come the modest little blossoms of white wall rocket, besom heath, hawthorn and wild garlic, amongst others. After that we get yellows and an endless variety of blue and purple tones. Then things really go wild with the poppies, as if the entire landscape were bleeding. The earth’s menstruation. The evidence of fertility. By the time you get here you’ve been left speechless.

It was just at this point that I called my friend Larry, when the Spanish lavender, rosemary and thyme were all flowering, along with the rockrose, sempervivum and wild sage, the thorny broom and the Scotch broom. I wanted him to come see just how over the top spring really was, with its unarguable vitality.

We got there early. It was still cool outside, and we were glad to be wearing gloves, but the light was sharp and clear, which is what usually happens after a few days of tramontana wind. Larry had never been there before, but I knew it would not leave him indifferent.

We began our walk at the manor house Can Torras, wandering into the vineyards below near the dolmen at Prat Tancat, and then followed the usual path that runs past the most important megalithic remains on the property . It is hard to believe what incredible botanical variety can be found in such a small area. You had to constantly lift up your gaze to get a look at how wonderful it all was. In general, when I am out gathering alone, I find myself doing this, but this time, looking through Larry’s eyes, I was simply unable to concentrate on what I was supposed to be picking. I immediately understood that a single day would not be enough, I just had to accept it. So I decided to enjoy the walk in the company of my good friend, who still lets himself be surprised by what comes his way, fully aware of just how stunningly overwhelming nature can be. 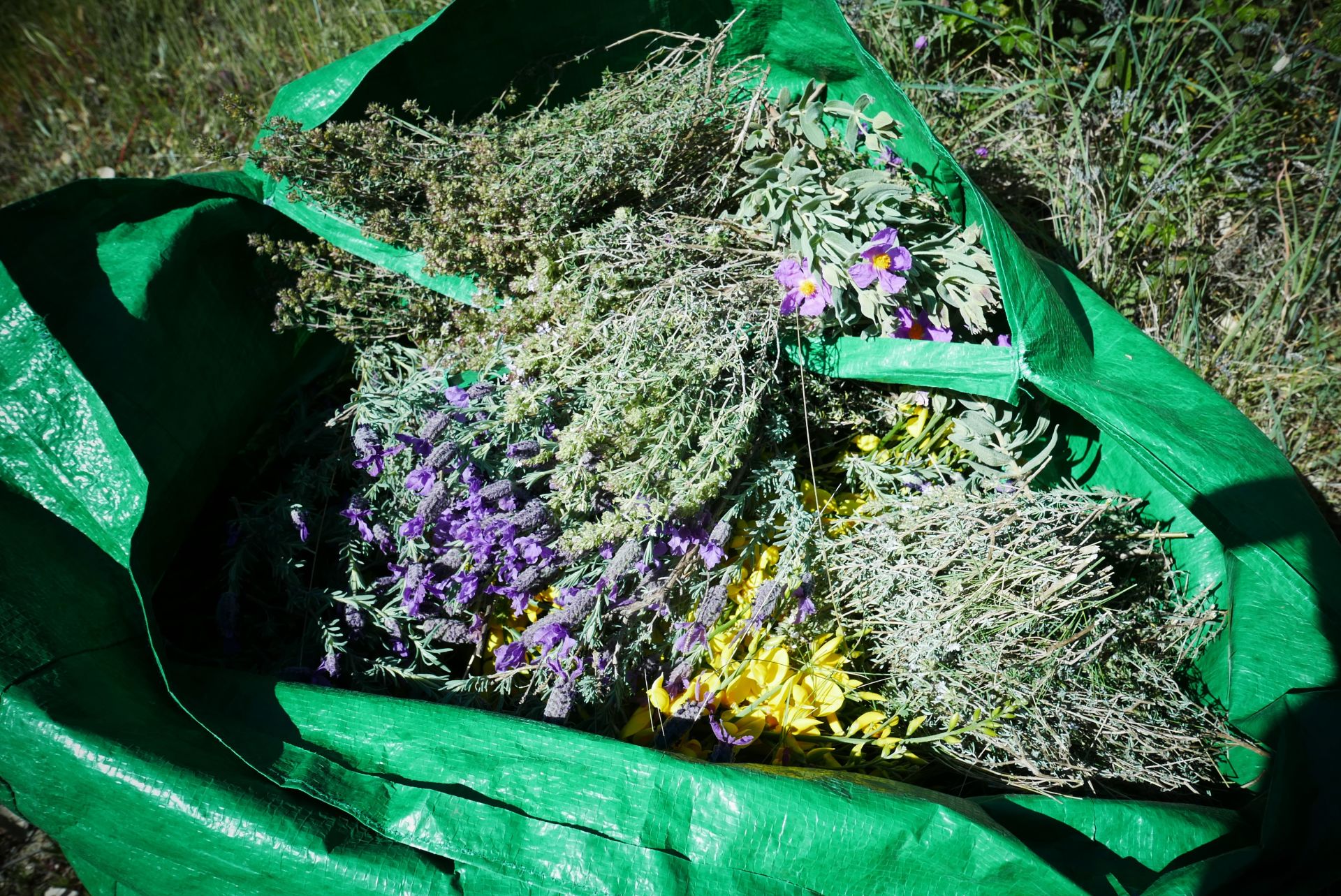 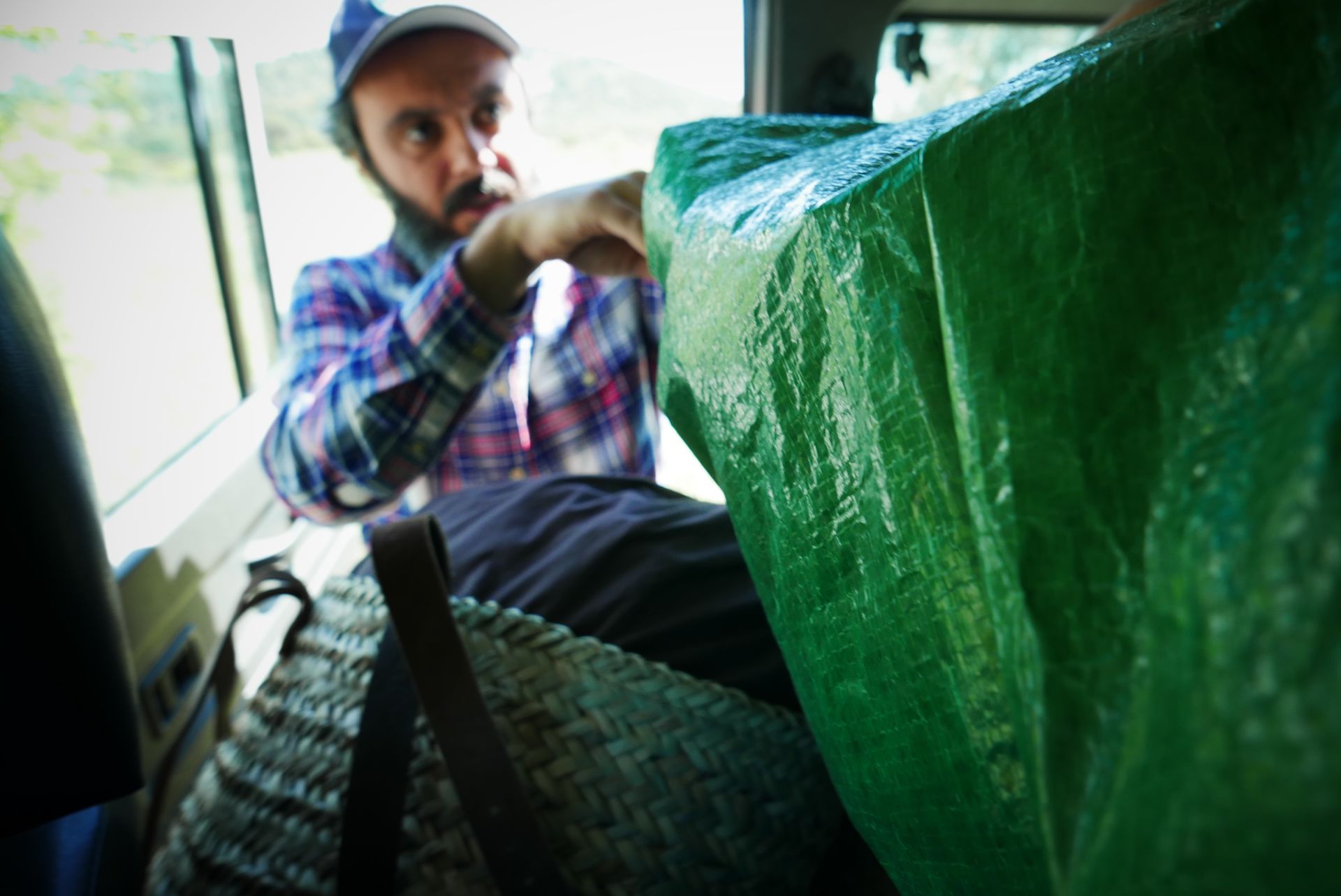 The path of the gods, that’s what Larry dubbed it, while we thankfully drank some fresh water, there in silence beside the Land Rover, loaded with plants. He was stricken from the start, another one in love with La Gutina.

I spent the afternoon distilling the plants, and the process lasted well into the night. The intense scent of the Spanish lavender filtered all through the house, altering us all. It was a lovely night, culling the essence of a beautiful day.

Next morning, I convinced Barbara to come finish the work with us. I got it easily. The previous night’s distilling had lured her in, and I did not have to ask her twice.

To my surprise, that next day the landscape seemed to be totally different. The plants were the same, the ponds were still there, confirming the mysterious ways of the water table, but the light was a thing apart. The sunlight was abrasive, almost thick, leaving no contrast. 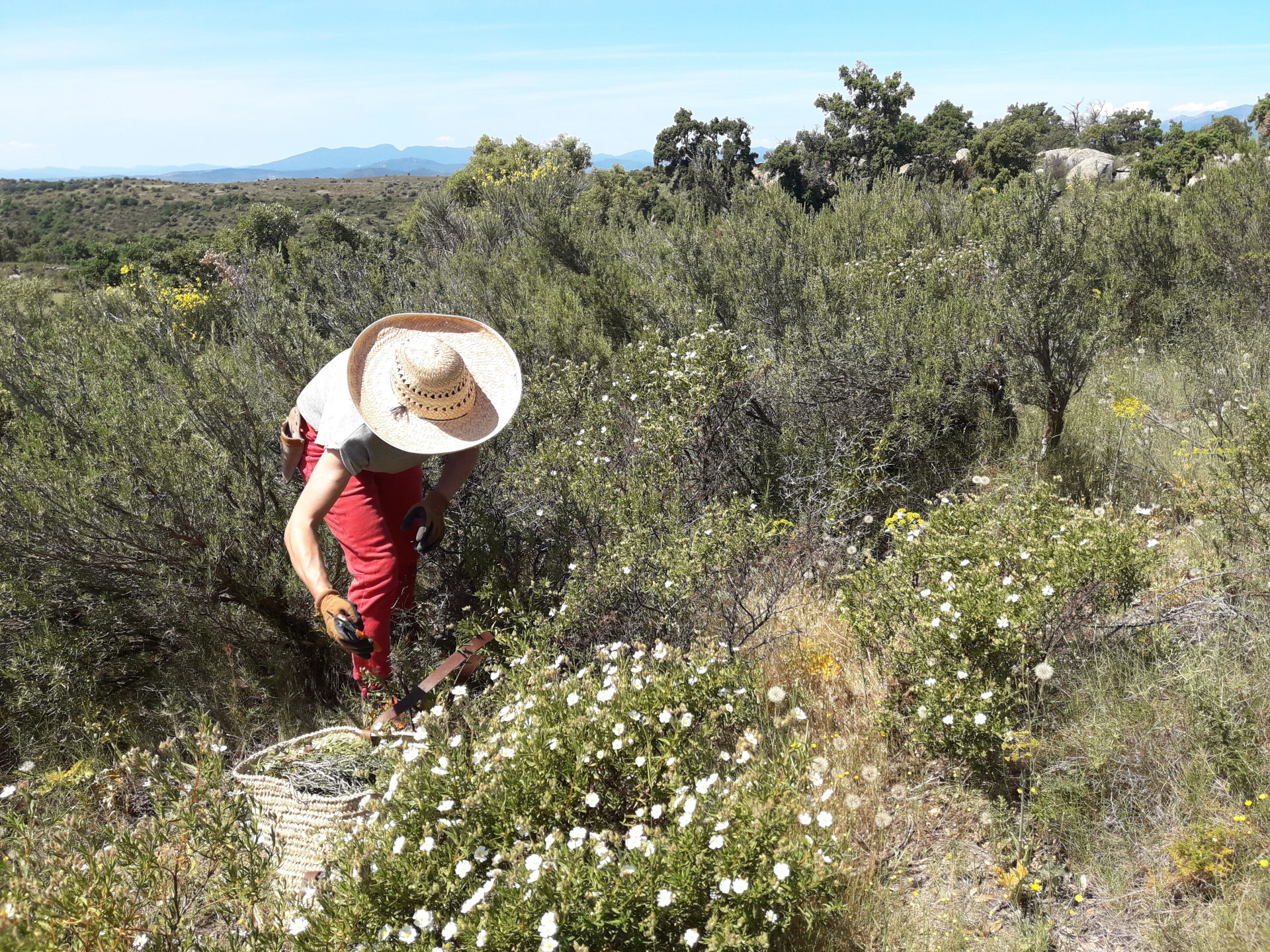 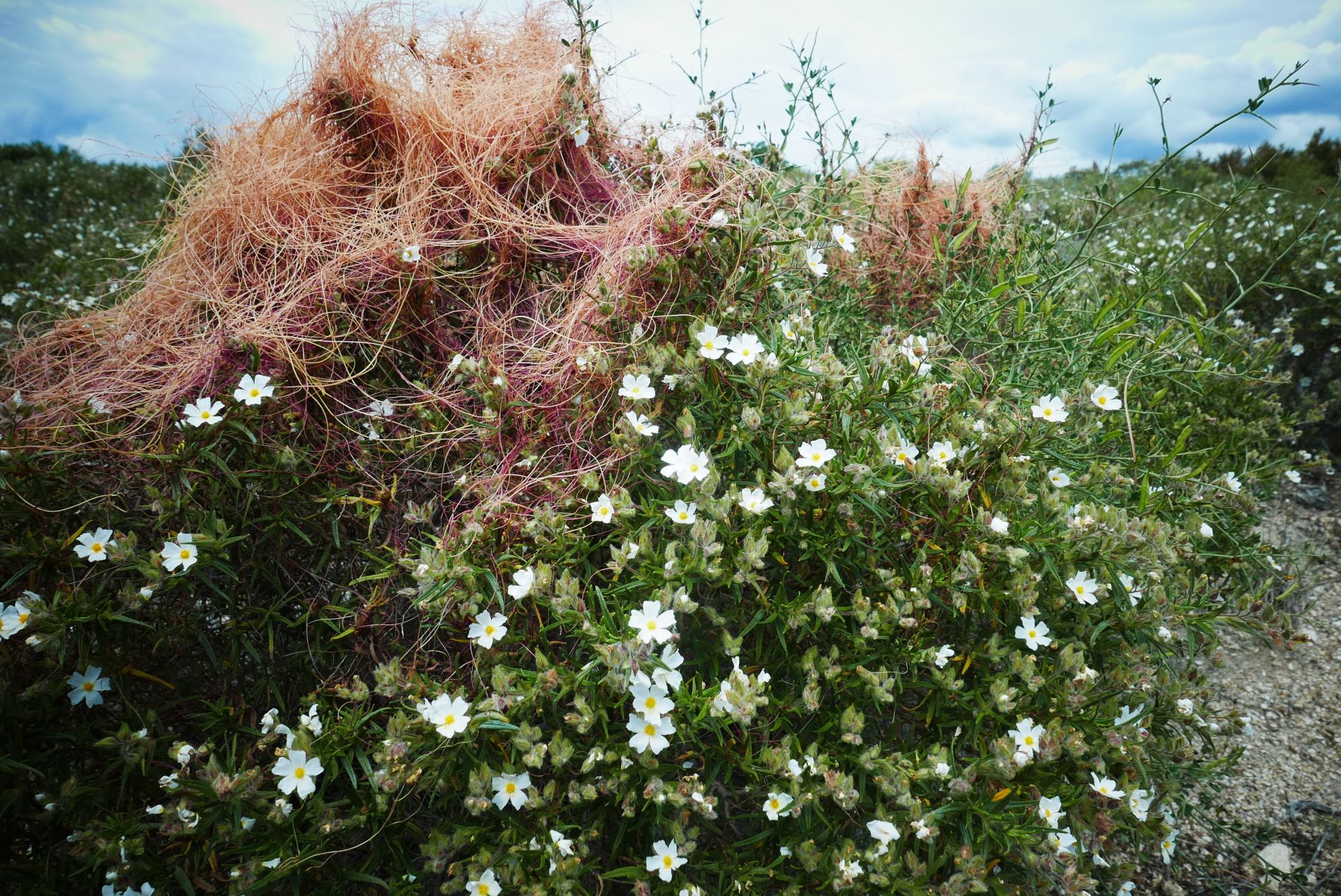 I think I am right to say that the plants smelled differently. Or, better said, they did not give off their scents with the same impertinence of the day before. The beauty of the place was quite the same, though different, less obvious, more charged with mystery.

Spring is like that, changeable and unpredictable, dynamic and in constant transformation. In fact, it is the least set in its ways of all seasons. Spring never rests, it never gets settled in. it is always in transition, like the present itself.

Barbara, who already knew the site well, was still enthused by what she saw. It is really a magical place, it is altogether special, and fully deserves to be captured in its entirety.

This CAMÍ brings together the essence of those two days of gathering, surrounded by the buzz of insects and the frenetic, procreative activity of the plants themselves. It encapsulates the adolescent impertinence of nature, totally gone overboard. There is something unstable about its fragrance, as it is always changing, in spite of its glaring lack of subtleties. You can sense its internal movement, its unsettledness, its rackety potentiality. It is almost a threat—or maybe it is like a promise.

If you want to read the text written by Larry Fernández, after your his in La Gutina, click here.

If you want to know the underlying motivations that have led Ernesto Collado to choose this spot for his first CAMI, look at this video: Watch video.